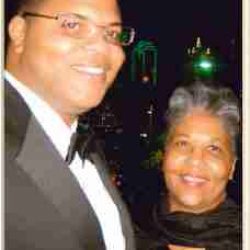 Alice Johnson is a SEE enrollee Mail Technician in Region 6.  In her capacity as a Technical Assistant, Alice assists the Region 6 Enforcement Branch Chief in maintaining and tracking the Branch mail and dispersing mail for the RCRA, Water and Air Sections.

Despite Alice’s importance to Region 6 and the SEE Program, perhaps her most important task has been raising four children, one of which is Eric Johnson – and I mean THE Eric Johnson — who is today the new Mayor of Dallas and one of the youngest mayors of a major American city.

When asked how she was able to accomplish this, she said she had a son who from a very early age, wanted to learn and to give back to his economically disadvantaged community in West Dallas.  Eric first attended public school in West Dallas until he, along with his first grade teacher, thought it would be a good idea to be tested at the West Dallas Boys and Girls Club to see if he would be eligible or qualify for a scholarship to attend Greenhill, St. Marks, Jesuit or the Episcopal school. He scored high enough on the admission test to attend the school of his choice.

As a result, he started his second-grade year at the prestigious Greenhill School. For a family with few monetary resources, there were hurdles along the way but nothing Alice couldn’t rise above.  When it came to parent-teacher conferences, Eric knew his mother’s work would prevent her from going so he negotiated a deal with his teachers whereby he would fill in for his mother at his sister’s parent-teacher conference and his sister would attend his parent-teacher conference and they would both report the results to their mother.  Apparently, Eric’s scheme satisfied his teachers!  Another time, Eric was told by his coach that his football uniform had to be cleaned for the next day.  He was worried because his mother did not have a washing machine, but Alice came through by washing the uniform by hand in the bathtub to get out the ground-in grime.  To dry it, she placed it in front of a box fan and by morning Eric had a clean uniform.   When the coach sent videos of the game for Eric to watch and they had no home VCR, Alice found one at her brother’s house and sent Eric over there to watch the video.  And there were many other times when, due to a lack of economic resources, Alice had to be creative to get them through.

Eric was offered academic scholarships to every college he applied for, including Harvard, where he earned a B.A., cum laude, in History.  A few years later, he earned a law degree from the University of Pennsylvania Law School and then a Master of Public Affairs from the Woodrow Wilson School of Public and International Affairs at Princeton University.  All this and Eric was the third kid in his family to go to college!  His mom really believed that an education was the best route to take to live your best life and give back to your community. Shortly after completing his education, Eric ran for and won a seat in the Texas House of Representatives from the 100th district which included his childhood home in West Dallas.  Somewhat later, Alice was totally taken off guard when Eric told her his next goal was to win the Mayor’s election: and, with her support, that is just what he did in 2019.

Eric’s awards and accolades for his community contributions are too numerous to mention here but suffice it to say, he learned about community service through his mother’s example.  Among her other community contributions, Alice was awarded A Daily Points of Light Award for counseling women prison inmates as part of the Life Connection Program and later received a letter of commendation for her volunteer work from the White House which is signed by George W. Bush.  Alice has been a participant in the SEE Program since 2002 and we celebrate her contributions to the EPA, her contributions to her community, and the creative love she used to raise her son to the highest level of community service in Dallas.