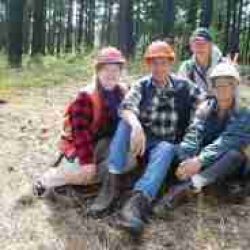 After 4 years of college, learning all the nuances of forest management I was eager to apply the knowledge I learned in the real world of forestry.  I was very interested in government-related jobs because they not only applied good forest management practices, but also were committed to multi-resource management which added a layer of complexity and challenge to the job.  My initial government job working as a Forester for the Bureau of Land Management in Susanville, California (1975-78) was a challenging job since it involved all aspects of forestry from planning and inventory to timber sale layout and administration, reforestation, timber stand improvement and other resource involvement as well including archaeology and wildlife, hydrology and range management. However, it was a seasonal job and I was looking for a more permanent future in forestry.  At the time, the Forest Service had many more of these opportunities and were committed to the same multi-resource management as the BLM.  After numerous applications and interviews I was able to secure a permanent position with the Forest Service in Coeur d’Alene, Idaho on the Idaho Panhandle National Forest in 1978.

2. What were some of the jobs you held during your career with the Forest Service?

My first job with the Forest Service on the Idaho Panhandle NF (1978- 1982) included a variety of work.  I supervised a FS crew of employees where we performed duties including marking and cruising timber in sale areas,  laying out timber stand improvement such as pre-commercial thinning and reforestation projects throughout the Fernan Ranger District.  Much of this layout work was done during the winter which brought on new challenges and experiences since transportation to the sites were often done using snowmobiles and snow-cats to transport crews, and the use of snow shoes and cross country skis to get the daily work accomplished.  Often we were camped out on the National Forest for the week.  Other duties included forest inventory work where uniform timber stand units were mapped out from aerial photography according to density, size and species composition and fixed inventory plots were installed and measured within these categorized stands.

To achieve a promotion opportunity I applied for and accepted a position with the Tongass National Forest in Ketchikan, Alaska (1982-1986).  My job title was TSI-Reforestation Forester. It was a uniquely challenging and rewarding job.  The Tongass NF is unique in that it includes all the small and big islands of land in the remote SE Alaska region where often the only access is by boat, hydro plane or helicopter with small remote FS camps located on the islands.  The predominant island I worked was the large Prince of Whales island.   I was responsible for laying out thinning and reforestation units, creating the required documents to advertise and award these projects to contractors where I performed all the Contracting Representative Officer (COR) duties including inspections of work for compliance. After 2 years, I was actually transferred out to the Ranger District in Thorne Bay on the Prince of Whales Island. The rugged terrain and rain that was measured in feet added to the challenge.

After 4 years of this challenge, and wanting a change to a less remote region, I did research and found that at that time job trades were a possibility where if you were able to locate another FS employee who was interested and qualified in working in your current job and you were interested and qualified in doing their current job,  a job trade could actually happen.  So, in 1986 I transferred out of Thorne Bay into a Forester position on the Ukonom Ranger District, Klamath National Forest located in Somes Bar, California.  This is where I became interested in obtaining my professional certification as Silviculturist.  Being accepted into FS-sponsored Silvicuture Institute, I took required courses at Oregon State and University of Washington and proceeded to complete a detailed silvicultural prescription which was submitted to the FS where I successfully defended it before an approval board and became certified.  I accepted another Forester-Silviculturist  position on the Six Rivers National Forest in Mad River, CA from 1988-1992 where I participated as an IDT (inter-disciplinary team) member writing silvicultural prescriptions,  laying out timber sales and some TSI/reforestation duties as well.

My wife was also a FS employee and my next career move was facilitated when she accepted a job offer as Hydrologist-Geologist on the Mount Baker-Snoqualmie (MBS) National Forest in Sedro Woolley, Washington.  As part of this move, I was also accepted as the Integrated Resource Inventory Coordinator position  on the MBS for western WA National Forests.  The permanent plot inventory position for USFS Region 6 became my passion and commitment for the last 25 years of my FS career.

3. What are some of the best memories of your Forest Service career?

Best memories of my FS career, there were so many but better keep this short.  As for my last job in the Region 6 Biometrics program, one of the best memories was being there and being a significant part of the Regional multi-resource inventory program that started with the installation of over 11,000 permanent plots across FS lands of Oregon and Washington in 6   years and then the complete remeasurement of all those permanent plots over a 10-year cycle.  All these millions of lines of data collected brought a unique system that was more robust than any other within the nation.  Seeing all the data cleaned up and uploaded to the FS data program called FS-Veg and used to show what resources we have, how they are changing, and how it could be used in making all kinds of management decisions and plans was a very proud and rewarding part of my career.

In my memory banks, especially when I was young, there are many memories of where the Forest Service basically saved my life when I was so focused on doing my job, I let safety take a back seat. I learned my lesson. Safety should always be first. Here’s one example.  It was the end of the field season on the MBS National Forest where I felt incredible internal stress that I  would not be able to finish all the field work planned before being snowed out of the mountains.  I had one remote inventory plot where helicopter access was the only reasonable choice.  I scheduled a flight to have the helicopter drop me off on a remote mountain top where I would complete my work and have the helicopter pick me up at   the end of the day.  Weather was threatening and I should have backed off from my plans.  The pilot took me up to the landing site as planned, dropped me off and left.  It was not more than 30 minutes before cloud cover dropped as well as temperature and a heavy snow storm started up.  I had not prepared for an overnight stay with extra supplies or clothing and a walk out of the area  would definitely be unsafe and require multiple night campouts.  I thought my goose was cooked.  I found shelter in a small cave on top of the mountain and contemplated my fate.  A few hours later, I heard an odd noise, looked up and as if from heaven, the clouds parted and my helicopter pilot landed.  I was beyond relieved.  He mentioned to me he saw the storm move in after he dropped me off, so he decided to travel to nearest heliport below in the valley and wait and see if he could get a break in weather to rescue me.  He literally saved my life on this day.

A lot of the best memories just comes from just working with a great set of caring,  compassionate FS people that became good friends to me.  Some are still very close friends from clear back when my career started in 1975.

4. What interested you in returning to the Forest Service in the FS ACES Program with NEW Solutions?

After retiring from 40+ years of working with the Forest Service and thoroughly enjoying my jobs,  I missed it !   What more can I say. This ACES program was an opportunity to enjoy retirement but also help the organization I was dedicated to for so many years, by sharing my experiences and knowledge with new recruits to the FS system.  When I was a new recruit, there were lots of “old timers” still working in my office locations that were very helpful to talk to and get answers to the many questions I had.  In today’s Forest Service environment, there are significantly fewer of these long-term professionals to confer.

5. What is your title with the Forest Service ACES Program and what do you do?

6. What do like to do when you are not working?

Hiking and exploring this beautiful country of ours.  Managing the 20-acres of property we own in Mount Vernon, WA and caring for and playing with the large number of animals we have on it.  Including my wife’s passion as a Golden Retriever breeder, we have 7 beautiful and loving Golden Retrievers as well as miniature horses, chickens, cats and cattle on occasion.

I enjoy playing tennis, water sports such as kayaking and skiing.  Snow skiing as well.

7. If you could invite six of the people you most admire to an imaginary campfire supper, who would they be and why?  (for example, it can be someone dead or alive; famous or infamous; celebrity or next door neighbor, etc.)

I would invite my mom and dad who were the most loving parents and true friends to me over    the years.  Of whom without, I would not be here.

I would invite my wife, son and daughter who are my inspiration and helped give my life complete fulfillment.

I would invite my good friend and co-worker from my early career years in California whom I have great respect for and he makes me laugh!