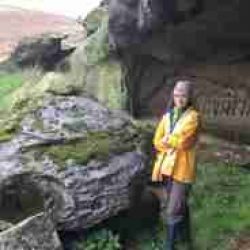 Denise De Joseph joined the ACES Program in June of 2017 as the Archeologist/Cultural Resources Specialist in the Davis, California USDA-NRCS office.  Denise’s Monitor, Tom Hedt, says “In a very short period of time, Denise has proven to be invaluable to our cultural resources efforts. In addition to field work for avoidance of cultural resources, she has developed our draft for a programmatic agreement with SHPO – State Historic Preservation Office – and presented to SHPO staff in regards to the draft, and she has re-built our system for consultation with SHPO and with tribes.  This includes a new format for direct Section 106 consultation with SHPO, which we had not previously done.  Her work has been invaluable.”

We asked Denise to give us a rundown on her lifetime of adventures and experiences, and she provided us with some amazing insights!

“Before I joined ACES, I was what I like to call “leisurely employed” rather than semi-retired; I had been working in private sector Cultural Resources Management (CRM) as a consultant since 2000.  In 2011 while on a mini-sabbatical in Hawaii, the Great Recession caught up with my Portland CRM firm where I’d been a principal investigator and project manager since 2005, and I agreed to trade in my full-time supervisory position for a half-time administrative position overseeing our regional environmental services contract with the US Army on Oahu.  Toward the end of that contract, having settled into a whole new life in Hawaii, I started my own consulting firm of 1.5 with a colleague who specialized in WWII-era archaeology of the Pacific Basin. Together we won a contract with the Hawaii Department of Land and Natural Resources to clear a backlog of cultural resources compliance reports for Maui County, where I was based by then.  After about a year of running the business I returned to my native California where I’d begun my career in CRM, as an archaeologist with Pacific Legacy in Santa Cruz after I finished my BA in Anthropology at UC Santa Cruz, and completed a Masters Degree in Archaeological Science at the University of Glasgow in Scotland years earlier.  I remember my first big project at Pacific Legacy was working on the FERC relicensing of Southern California Edison’s Big Creek Hydroelectric Project in the central Sierra Nevada for four years. To this day I can thank my supervisor and mentor, Dr. Thomas Jackson, for starting me on the path I’m still on today, which is specializing in compliance with NEPA and Section 106 of the National Historic Preservation Act. During my first week on the job he drafted me for the Big Creek project and handed me a thick white binder that contained the Section 106 regulations (36 CFR Part 800) and instructed me to “read the regs” which to this day is my mantra – just ask my ACES monitor, Thomas Hedt – “Hey, read the regs!”  Towards the end of that project I began work on several Central Valley projects as well, including the transfer of the Naval Petroleum Reserve No. 1 to a private co-generation company, trigging, of course, compliance with NEPA and Section 106. We found a lot of cool stuff on that project: several prehistoric seasonal camps with midden deposits containing freshwater mussel shells from the former Buena Vista Lake and slough, and a 9,000-year-old Olivella shell beads from the coast.

My Central Valley and Sierra Nevada fieldwork experiences are the ones I draw upon most in my work with ACES program for the NRCS California State office.

I discovered the ACES program rather by accident.  After spending a year as a tour guide for UnCruise Adventures aboard the SS Legacy, a replica coastal steamer plying the Columbia River in the footsteps of Lewis & Clark, I returned to California for family matters and spotted a job on Indeed.com for a Cultural Resources Specialist with the NRCS in Davis, CA.   They were looking for someone to help with survey work in the Central Valley and the Sierra Nevada through the ACES program, and since I’d recently seen the backside of 55, I applied and accepted a part-time position. At that time, the NRCS CA State Archeologist position had been vacant since 2016, and the state’s Programmatic Agreement for compliance with Section 106 had been expired for two years.  The hiring freeze at the Agency meant that they couldn’t expand their cultural resources staff to keep up with the work load, which is why they turned to the ACES program. When I told my Monitor, Tom Hedt (State Resources Conservationist) that I had 17 years of experience assisting federal agencies comply with Section 106 and NEPA and could help him get a new PA in place and shore up the agency’s cultural resources program, he sought authorization from NEW Solutions to grant me full-time status so I could “fill in” for the vacant State Archaeologist position. That was a year ago, and since then I have helped the NRCS draft and submit a new PA to the State Historic Preservation Office (SHPO) and established new procedures for complying with standard Section 106 regulations, including revising how the Agency fulfills its government-to-government tribal consultation responsibilities under the regulations.

The core of my job revolves around ensuring that the NRCS’s EQIP and WRE program undertakings adequately reviewed for compliance with NEPA and Section 106. That means desktop analyses of dozens of conservation plans submitted for cultural resources review during each EQIP batching (funding) period, for which I research the land use history of the client’s parcel, conduct historical archives research, check federal and state historic registers, and, of course, conduct survey fieldwork. I’m responsible for the middle “slice” of the state east and west of the state office, which includes some of the Bay Area, Central Valley, and the Sierra foothills. I am also the lead for consultation with the State Historic Preservation Office for each reviewed undertaking for the EQIP, WRE, and EWP programs, which includes a lot of form preparation, consultation letters, and tracking, in addition to working with the planners and field offices to ensure their conservation plans comply with the regulations. Additionally, I lead the coordination with other federal agencies on those reviews that involve environmental permits.  Ensuring the NRCS CA is in compliance with NEPA and Section 106 while providing efficient and timely assistance to our planners and field offices so they can get our conservation plans “in the ground” is the most challenging part of my job.  Very often it is these laws as well as those for endangered species that tend to take the longest and present the most challenges for the agency. Overall, it’s a lot more office work than field work for me, but after being with the agency for over a year, I am certain that being in the ACES program allows me to strike a satisfactory life/work balance much more readily than if I were a federal government employee. The benefits we enjoy as ACES program enrollees are just as good, I find.

I really enjoy my work as an ACES enrollee; I am a core member of the NRCS technical support team in the Ecological Sciences Division, which allows me to do what I love and also to be in a position where I can get things done and have an influence on the agency’s well-being, while not having to meet supervisory or training responsibilities I’d have to do if I were an employee. It’s a bit like being “leisurely employed” – or “semi-retired” if-you-will, and at the NRCs state office, being an ACES enrollee is like being part of an elite club.  We often joke that the ACES team members are the ones getting all the work done!

Best of all, the ACES program affords me the flexibility to be of service, to make a real difference, and still have the time and the mental freedom to leave my job behind and pursue my personal interests and goals, like restoring and sailing my vintage Ericson 25 sailboat and hanging out with my interesting dock mates at the historic Vallejo Maria across from the equally historic former Mare Island Naval Shipyard, visiting friends in Hawaii several times a year, supporting ocean conservation, and reading my ever-expanding stack of maritime and US history books. I’m also learning Spanish and how to play the ukulele.

I still find it hard to believe that I could be old enough to qualify for the ACES program, but I’m so glad it exists because it suits my adventurous solo life pretty perfectly, and I expect to remain an ACES enrollee with the NRCS right through to my REAL retirement.”

Denise is a wonderful asset to her office, and to the ACES-NRCS Program in general!  It takes a qualified, interesting and talented person to be an ACES Enrollee, and NEW Solutions celebrates the power of experience with Denise and all of our Enrollees!!