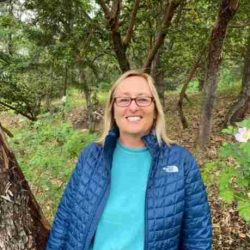 Janet Hahn wasn’t retired for long before she dived right back in to work.  After 30 years spent with the U.S. Forest Service, and with an educational background in engineering, Janet happened upon the BLM-ESP program and joined it only 7 months after retiring.  She’s been in the program for a year in May 2020.

Janet is based in the Medford District Office in the Engineering Department of the Ashland Resource Group.  She works for the Timber Program ensuring the good condition and safety of all the roads under their purview, and just finished working on a large timber sale involving 70 miles of roads.  She spends most of her time in the field, inspecting logging roads to make sure they’re free of brush that would prohibit driving, making sure the gates that are supposed to be locked actually are, and making sure culverts are flowing freely and not blocked with debris.  She often accompanies brush-cutting crews to inspect their work – she’s even had to deal with a hostile landowner bullying the crew.  She dealt with the situation diplomatically and stayed with the workers all day to ensure their safety.

The outdoors are a calling for Janet, who gardens, trail rides her horse, and hikes with her husband frequently.  She even had her husband volunteer with her for a recent project.  The federal employee who would normally do the fieldwork was unable to, so Janet was asked to step in.  She and her husband drove around a large area recently hit hard by the flathead fir borer.  They photographed the forest damage and mapped it in software so the silviculturist could come back and survey the area later.  This work also helped fulfill a Freedom of Information Act request.  She’s continued this kind of fieldwork with post-fire vegetation surveys, field-validating the mapped damaged areas and relaying the data to the silviculturist.

Janet is currently working on a large road re-construction project, where she’s been single-handedly measuring road widths, determining which culverts need to be replaced and their appropriate dimensions, determining the locations of turnouts and parking areas and measuring for them, and calculating the volumes of rock fill that will be needed for these areas.  She gathers all the field data and her monitor, with whom she has a fantastic working relationship, compiles the data in the office.

Janet’s favorite parts of the ESP program are the schedule flexibility – she’s been working around 20 hours each week, but can do more or less as she desires – and that she can still spend time in the woods and use her engineering knowledge, but doesn’t have to do it full-time.  She has a great monitor who’s very supportive of the ESP program, and three other ESP colleagues in the office.  Janet and her monitor even got a shout-out in a recent BLM newsletter for their great work.  Janet’s daughter is following in her footsteps, currently working to earn her engineering degree.