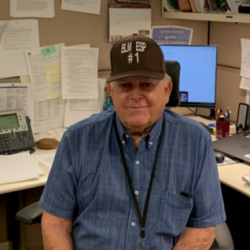 So, someone has to volunteer to be the first!  In this case, Jeff Holdren is our first BLM Experienced Services Program (ESP) enrollee.  The BLM and National Experienced Workforce Solutions (NEW Solutions) officially began the ESP on April 16, 2019 when Jeff began his enrollment in the program.

Jeff began his BLM Federal career as a Range Conservationist/Realty Specialist in Riverside California in 1965.  He spent some time in Nevada as a District Realty Specialist and an Area Manager in the 70’s.  Then on to the Eastern States and HQ till he retired in 2010.  After retirement Jeff still loved the work and returned as a re-employed annuitant and later as a volunteer.  The Washington Office Lands and Realty program really wanted to be able to pay Jeff for his contributions.  When the ESP was implemented, they were the first to pilot the program.  And the rest is history.

When Jeff comes to the office in the morning, he doesn’t really know what the day will hold.  Things come up, but that is the fun of the work.  When things don’t come up, one of Jeff’s biggest projects is to conduct research for and review regulations regarding the right of way program, the cost recovery program and communication site facilities.  These are joint regulations requiring coordination.    Jeff also works on the end of year report on costs associated with hydropower licensing by FERC.  This can cover other areas such as fisheries, archaeology, cultural resources, transmission, hydropower licensing and so forth.

When asked what Jeff likes about the ESP Program, he said, “ I like to work and I like the people I meet with. I hope more people at BLM get on the bandwagon.”  He tries to promote the program when he gets the opportunity.  He gave a presentation to the Associate State Directors and explained how it works.  He feels that the organization is doing a great service and hopes BLM supervisors and managers utilize the program to facilitate BLM’s mission.

When asked about Jeff, his Technical Advisor said:  “Jeff is an asset to our organization.  He can easily recall information from realty issues that occurred many years ago that would otherwise take hours research.”

When Jeff isn’t at the BLM he likes to work around his house and do gardening and walking.  He lives close to his daughter and has two grandchildren in college.  He would love to relocate to Arizona and continue to work on the program.  One special hobby of Jeff’s is collecting old maps that he finds at map stores and auctions.

We want to spotlight Jeff’s amazing history and contributions to the ESP.  Jeff will always be our Number 1!