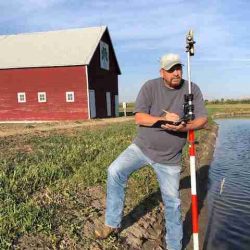 ACES Program participants come from many facets of life, and from all over the country.  Our Enrollees have special talents that enhance the Natural Resources Conservation Service’s contributions to keeping our environment healthy and our agriculture productive.  We’d like to introduce to you one of these gifted ACES enrollees – Mike Lee from Fort Morgan, Colorado. His Monitor, C.W. Scott, describes Mike’s contributions to NRCS: “Mike has provided outstanding engineering assistance for the last 38 years spanning an NRCS and ACES career. During his long career Mike has provided training to 7 student trainees, many NRCS employees and partners for multiple field offices throughout Colorado. His ability to explain engineering practices in a commonsense manner is unmatched in his field. Mike has been a rock for the Fort Morgan Field Office for all these years not only completing all the engineering designs, installs and checkouts but also jumps in to help with other tasks that always seem to be priority 1. His well-rounded approach to all his work has helped him become a favorite with everyone he works with.” Before joining the ACES program, Mike was a Civil Engineering Technician for the Soil Conservation Service/ Natural Resources Conservation Service for 35 years. He first started his career in the Rocky Mountains in the mountain town of Kremmling, Colorado.  He ended up across the state on the eastern plains in the town of Fort Morgan, Colorado.  He says his 35 years consisted of more surveying than he can remember, and design and application of soil and water conservation practices such as irrigation pipelines, irrigation structures, sprinkler irrigation systems, ponds, stock water systems, terrace systems, dikes, diversions and the like.  Mike feels he has always been lucky to have the ”go to” people, contractors, other Technicians and Engineers alike, when things got really tough. He says he will always credit a lot of his present knowledge and experience to those “go to” people. Mike first became aware of the ACES program when a co-worker and good friend in an adjoining county retired and had soon gone back to work as an ACES Engineering Technician. He was extremely happy with his ACES position as it allowed him great flexibility as far as work schedule and kept him involved with the agency, he had spent his career with. When Mike’s turn to retire creeped up, his friend who had joined ACES previously was instrumental in steering him in the right direction.  Mike had planned to “retire” but he certainly did not plan on giving up working as well, and the ACES Program filled that need perfectly! Other opportunities had been presented to Mike, but the ACES Program with its flexibility and allowing him to utilize years of valuable experience, all while working with great co-workers and private landowners was a perfect fit for Mike. Mike’s present duties as an ACES Enrollee involve assisting the office with the administration of various Farm Bill programs, as well as the design and application of soil and water conservation practices. Mike is also instrumental in training new workers. He has found that he consistently has a trainee or new employee to mentor and help develop into another great asset for NRCS. He feels that he is usually taught a lot in return, as the generational differences have really enlightened him as to the different ways of thinking, and the younger mindset has great ideas!!  It is a win-win situation all the way around! One of the hardest parts of the ACES position, according to Mike, is trying to explain to someone what he is contemplating in his own mind at a much quicker pace than expected! He says it forces him to slow things down a little bit, but at the same time, forces him to verify and triple check things, so that any faulty or incorrect information is not passed on to others.  It makes him check himself in ways he has not done in years, which he feels is a good thing. Mike feels Technology is also a challenge, not so much for those Mike may mentor, but for Mike himself! He prefers old school methods of accomplishing things, whereas the younger generation is usually extremely tech savvy.   The beauty of it all is generally they learn the concepts and processes in an old-fashioned way, and then can apply modern technology and be further ahead in the long run. Mike feels the “students” usually teach him as well, and between the 2 different worlds, it produces a pretty good team, and they have fun getting the job done! 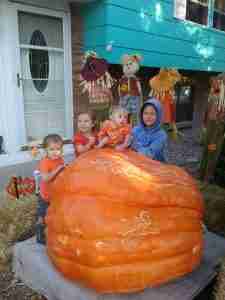 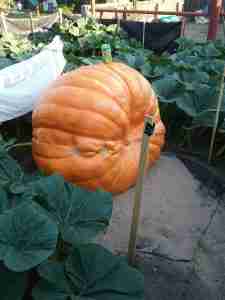 In his spare time Mike enjoys fun with his grandkids, hunting, fishing, camping, backyard cooking and playing in his pumpkin patch!!  And oh, that pumpkin patch is awesome!  Mike produces some of the largest pumpkins in the area – over 650 pounds each!  Mike says they hope to break 1,000 pounds, and that their biggest to date has been 871 pounds – that is 871 pounds of pumpkin!!!  Not a small feat and with the Colorado climate it is challenging – but remember – Mike has an abundant background in agricultural conservation, and it shows! 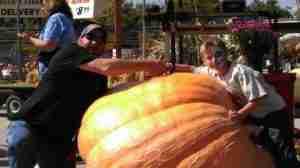 Our thanks go out to Mike Lee, as well as the wonderful group that he works with in the ACES-NRCS Program in Colorado!