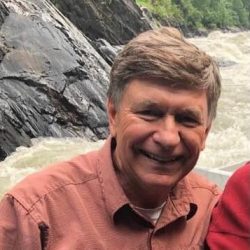 Paul Hickey spent 34 years of his career with the BLM in various locations throughout the west. He got out of the US Air Force in 1976 and got a job on a survey crew for the US Forest Service. He discovered he enjoyed the work, and his coworkers encouraged him to go to school for surveying. He earned his associate’s degree in surveying engineering technology, then his bachelor’s in civil engineering technology with a surveying emphasis, and hasn’t looked back. He’s an Alaska Registered Professional Land Surveyor and a Certified Federal Surveyor.

He started permanent work with the BLM in 1982 in the Alaska State Office as a land surveyor, working in various surveying roles in the New Mexico State Office and the Oregon State Office throughout his career, including seven years as the BLM Indian Lands Surveyor (BILS) consulting for 25 tribes in the BIA Southwest Region. He retired in 2013 and wanted to return to Alaska to be closer to his kids and grandchildren.

After moving back to Alaska, Paul worked for a private surveying company for a year, and then began working for the State of Alaska’s Department of Natural Resources as a survey coordinator. He was later promoted to the Deputy Chief Surveyor for the DNR Survey Section. Paul retired from that position in 2020 and almost immediately came to work for the BLM again as an ESP enrollee.

When Alaska became a state, 103 million acres of it was designated to become state land. Other entities, like Native corporations, also received land entitlements. Before the state or a Native corporation can get a deed to their land from the federal government, it must to be surveyed, so the BLM goes out and surveys townships, marking the boundaries every 2 miles with physical monuments and taking copious field notes describing the locations of these monuments.  After the field work is completed, the BLM prepares the official survey record, consisting of the plat – a graphic portrayal of the survey – and the field notes, which must be critically examined and found correct before they are officially approved.

In his current ESP work, Paul is supporting the BLM Alaska State Office by critically reviewing cadastral survey plats and field notes for state and Native corporation land entitlements. During his reviews, he relies on his lifetime of cadastral survey experience to help ensure that official surveys have been correctly executed in accordance with the requirements of law and the regulations of the BLM. Currently, Paul is working on the critical review of a large survey project consisting of 70 townships, containing over 1 million acres of State of Alaska and Native corporation land entitlements, located in the Brooks Range of northern Alaska. This project brings back many vivid memories for Paul, since he worked in the field as a BLM land surveyor student trainee in this same rugged area of the Brooks Range back in 1979.

Since the professional surveyor workforce is aging, Paul works to get people interested in surveying whenever possible, as his colleagues did for him at the beginning of his career.

Paul recommends the Experienced Services Program to those individuals not quite ready to fully retire.  He enjoys working from home and the flexible schedule, allowing him to complete his work as it fits into the rest of his life.  He usually works 3 to 4 days a week and uses the remaining days for RVing, camping, berry picking, and kayaking in the beautiful Alaska outdoors and spending time with his wife, children, 7 grandchildren, and multiple dogs.