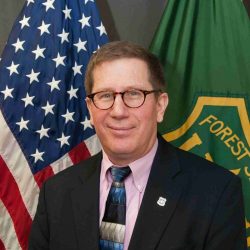 Peace Corps to pipelines makes for an unusual career path but is one that worked out very well for Peter Gaulke, Forest Service ACES Natural Resources Planner.  Peter started out a few decades past by obtaining a B.S. in Forestry at the University of Wisconsin-Steven Point and then embarked on ”The Toughest Job He’ll Ever Love” with the Peace Corps as a Forestry Extension Agent in Guinea, West Africa.  In the two years that he was there, he organized and directed village reforestation and soil conservation projects in six villages for a United Nations Food and Agriculture Organization project giving him experience in cross cultural endeavors and a feel for international development work. When he returned to the U.S., he used his one year of non-competitive eligibility and was able to land a position with the Forest Service as a Tree Improvement Technician (genetics) on Oregon’s Siskiyou National Forest.  This work then led to serving as a Silviculturist on the Rogue River National Forest.  From there he returned to the Siskiyou NF as District Environmental Coordinator but managed to work during six tours on community-based natural resource management projects in Madagascar between 1993 and 2004. In addition to assignments on the Siskiyou, Rogue River, and Cibola National Forests (New Mexico) and the Southwestern Region, Peter began a series of National Headquarter assignments in Washington, D.C.  These involved the preparation of briefs for litigation, a year as a Congressional Fellow for Oregon Senator Jeff Merkley, and the development of policies pertaining to sustainable forest management and the National Environmental Policy Act. From Washington, D.C. Peter moved to the Southern Region in Atlanta, GA and assumed the role of Regional Planning Director.  His duties shifted again when he ultimately culminated his career in the position of Lead Executive for Pipeline Infrastructure for the Southern and Eastern Regions. But wait!  There is more to his international story.  From 2005 to 2008, Peter took on several assignments for the USFS Office of International Programs including stints in Madagascar, Guinea, Senegal, and Namibia. Peter has been a master at taking on assignments in many different aspects of national forest stewardship including planning, preservation, protection, policy, administration, litigation strategy, energy development and more.   Just as it facilitated his early Peace Corps days in Guinea, his ability to build open and inclusive interpersonal relationships with the public, stakeholders and local government officials has taken him down many roads in his 33 years of work in public land management.  Having him participate in the FS ACES work has been a stroke of luck for the program.   However, the FS ACES assignment will surely not be the last of the roads he will follow to a successful end. 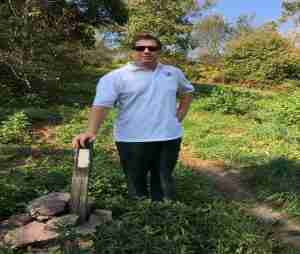