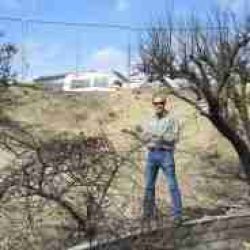 As with many of the talented people that are involved with the ACES-NRCS Program, Rich Casale started as an ACES enrollee shortly after he retired from the USDA Natural Resources Conservation Service.  He had served for most of his career (43 years!) as the District Conservationist in Santa Cruz County, CA.  Rich had worked with several ACES enrollees while employed by NRCS over the years and always thought that type of work would be a great fit for him after he retired.  A short time after he retired Rich decided to contact his old boss following the wine country fires in CA to see if he might be able to assist as an ACES enrollee with working with landowners who suffered damages and loss following devastating wildfire.  Of course, his boss was delighted that he was willing to go back to work as an enrollee, and especially under the natural disaster circumstances!

Rich likes to give credit to a special mentor, Eugene Andreuccetti (retired in 1998 and now deceased), who was a NRCS Assistant Chief and Regional Conservationist, as well as the State Conservationist for CA in the 1980s.  Gene “Gino” became a great friend and taught Rich a great deal about the importance of the human/social connection and interaction in translating the conservation science and message to landowners with natural resources under their stewardship.

Rich, in his role as an ACES Enrollee, primarily provides on-site individual property assessment to lands affected by the CA Wine Country Fires, southern CA Thomas Fire (largest fire in CA history-nearly 300,000 acres) and Montecito Debris Flow (that damaged/destroyed over 500 homes and 23 lives lost). His assessments included treatment recommendations and supporting fact/guide sheets. On several occasions he met with entire neighborhoods going door-to-door. Additionally, he gave several community presentations to fire victims in need, with attendance anywhere between 40 and 400. Rich also wrote many of the NRCS fact sheets that were distributed following the site visits and meetings/workshops. On occasion he provided week long training in the field (as he was assisting fire and debris victims) to newer NRCS employees who had not had experience with post fire restoration. After completing all the requested site visits (more than 150 total) Rich continued to work part time (or on an “as needed” basis) speaking at various meetings and events including more landowner workshops and an agricultural professionals workshop held at UC Davis on July 24. In the evenings he would work on writing new fact sheets and reviewing post fire information from other organizations.  Rich cooperated with and co-authored a Post Fire Guide published in 2018 by the CA Native Plant Society. He also developed a fire hazard resistant plant list with the Native Plant Society for all the fire areas he assisted.

In Rich’s own words: “When you control water you control nature. So why not use nature in your erosion and sediment control efforts? Many, if not all, erosion and sediment control practices attempt to control rain drops or runoff in one form or another especially those that are applied to landscapes following wildfire. If you are not fully aware of the natural processes in play following fire (or what I like to refer to as “the nature connection”) then your erosion and sediment control efforts may fall short or even be self-defeating.  I spent 5 months assisting property owners impacted by the devastating 2017 wine country wildfires in northern California and then Thomas Fire in southern California. The Thomas Fire became the largest wildfire in California history having burned 281,893 acres and destroying 1063 structures, most of them homes in Santa Barbara and Ventura Counties. I also met with home owners in Montecito whose properties were damaged or destroyed by debris flows.  I conducted post fire/debris flow site assessments on over 150 properties and gave presentations on post fire restoration at several community meetings where I was able to reach several hundred more fire victims.”

When asked about what the most challenging thing about his duties/position is, he replied: “I would have to say that the most challenging thing about my work in the fire areas was helping people not become their own worst enemies and helping them not get taken advantage by opportunist contractors selling “snake oil”. Most folks felt that they needed to something more than wait on nature and didn’t quite understand that message until I met with them. Unfortunately, many fire victims installed inappropriate measures, made unnecessary soil and slope disturbances and added “insult to injury” on a number of different levels. In almost all cases these folks thought that they were doing the right thing and partly because that was what their neighbors were doing but almost everyone was doing these things without expert advice.”

When asked the question – What do you enjoy most about the ACES Program – Rich replied:

“I love that NRCS had a way (ACES) to bring me back to work so that I could provide my expertise and 43 years of experience to hundreds of landowners in great need, especially those that suffered fire or debris flow damages and/or lost their homes, crops, and/or natural resources. I like the ability to have flexibility in my work schedule which ACES offers. I love working with everyone affiliated with the ACES program including my monitor but all those all the way up the line. Everyone has been extremely helpful, professional, responsive and genuine. What a pleasure it has been being an ACES employee. It was never about the money and so the modest hourly wage had nothing to do with my interest in the work I performed or being an ACES employee. The fact that there is some compensation for work hours performed and travel makes it possible for someone like me to stay involved and help. It’s an absolutely great program and hope there will be continued funding for it in the years to come. All the work I performed as a post fire restoration specialist and Certified Professional Erosion and Sediment Control Specialist, assisting 100s of fire victims restore their lands, protect natural resources and prepare for winter rains would not have been possible without ACES.”

We also asked some other questions for Rich to consider:

And, as a bonus he added:

I have a few favorite sayings (all mine):

“Some Day is Now”