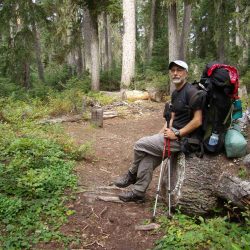 Steve Acker retired from federal service in the summer of 2020. He spent his career as an ecologist with the National Park Service, the Forest Service, and Oregon State University.  Steve started working on inventory and monitoring (I&M) for NPS in 2000; later in the decade he worked with others from NPS units in western Washington to study tree demographics to understand change in forests. They set up 45 study plots in 4 NPS units in varied ecosystems to study whether tree mortality was as high as was being seen in other forests in the western U.S. From 2008 to 2013, they observed the plots yearly. The paper presenting the results of that study, which did not find an increased rate of mortality, was published right as Steve moved to a new job in the Forest Service.

In the USFS, Steve continued his work in the same vein, and expanded his activities into landscape ecology. In 2018, the NPS team had a chance to study their western Washington plots again, doing fieldwork with federal colleagues and seasonal employees.

Since beginning to work as an enrollee with NEW Solutions, Steve has targeted understanding trends in tree mortality among the  nearly 9,000 trees of 25 species in Lewis and Clark, Mount Rainier, North Cascades, and Olympic National Parks.  This baseline data will be used to assess forest change and provide insights into places that exhibit the highest rates of environmental resiliency and vulnerability, especially relative to climate effects such as drought. Toward this goal, he has conducted a literature review, strategized on how new research can apply to the NPS study plots, created new research questions, and created an approach to data analysis using newer statistical and software tools like R Studio and GitHub. He is looking at 10 years of data, comparing the first 5 years to the second 5 years for tree mortality in the forests, and exploring whether or not factors related to drought help explain patterns of tree mortality. Steve and his colleagues will eventually publish the results in the NPS’ Natural Resource Report Series or in other scientific publications.

Steve loves that he has a chance to continue doing the work that he finds enjoyable and meaningful, collaborating with new and former colleagues, helping people earlier in their careers to gain perspective and skills, making a contribution to federal land management, all while still enjoying retirement because of the ESP’s flexibility. He appreciates the ESP as a great way to transition from working full time to being fully retired.