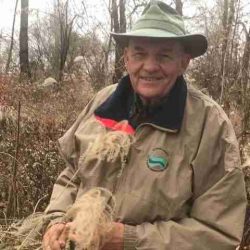 The National Older Worker Career Center take great pride in spotlighting our Enrollees.  We recently had the pleasure of asking a fantastic ACES-NRCS enrollee some questions about his lifetime experiences, both with, and in addition to, his work at NRCS.  We would like to share with you our ACES-NRCS Enrollee – William “Scott” Martin – who works with the NRCS Office located at Murphysboro, IL.

Our first question to Scott was what he did before joining the ACES Program.  He gave us a rundown on his career in soil conservation.

In early 2017 , he retired from working for the Natural Resources Conservation Service (NRCS). After graduating from the University of Illinois, he began a 40-year career working for USDA as both a soil scientist and soil conservationist.

He admits that he might not be the average ACES employee. He basically came back to work part-time for ACES at the same Natural Resources Conservation Service (NRCS) office from which he had retired from 9 months earlier. He had served for 40 years as an employee of first the Soil Conservation Service (SCS) and then with the Natural Resources Conservation Service (NRCS). Initially, he worked for 13 years as a soil scientist on the fieldwork and manuscript of four Soil Surveys in Illinois. That work was ultimately digitized and included as part of the Web Soil Survey that is often used in conservation planning. The last two-thirds of his career with NRCS was as a Soil Conservationist. He worked with private landowners and farmers who wanted to improve various conditions on their land. His main work was planning erosion control systems on grain farms and grazing systems for livestock on more sloping areas of the county. He also worked with other federal agencies like the Forest Service and Fish and Wildlife service to cooperate on large scale projects that covered both private and public lands. Working with different groups towards a common goal takes time and can be difficult. He learned from a Steven Covey book: Seven Habits of Highly Effective People, to “Seek first to Understand, and then to be Understood”. Asking others what their interests/concerns are before stating his opinions/needs is probably the most important skill that he admits to using in his job.

Scott had originally signed up as a Phased Retirement which would allow him to work half time and phase into full retirement. Phased retirement implementation was delayed in his state the year he retired. After being retired for several months, his former supervisor notified him that his state was planning to participate with the Agricultural Conservation Experienced Services (ACES) program.

When we asked Scott’s Monitor, Andy Schlichting, District Conservationist, about Scott’s work at NRCS, he responded quickly “Scott’s position with us under the NEW Solutions status has been an invaluable asset to our NRCS three county District.  Scott has assisted us in providing multiple outreach efforts for our NRCS programs with an emphasis on pollinator habitat as well as providing training to new employees, conducting initial onsite conservation planning visits, assisting with CSP spot check site visits, gathering data for NRI, and gathering information for NRCS employees to perform conservation practice certifications.”

Next, we wondered what type of work Scott did at NRCS on a routine day.

What we found out is that Scott works part time when needed so his workdays vary. He tries to spend much of the time outside in the field collecting data and keeping notes. Recently, he evaluated several dry dams that were constructed by famers to control gully erosion. He used survey equipment to determine the height of the dam as well as the front and back slopes. Scott and others had initially built dry dams for the farmer following specific Agency criteria. Surveying the site allowed him to make sure the design specifications were met so that the dry dam system worked properly for the farmer. He had evaluated one dry dam, so he visited and informed the farmer that he had more work to do.

On other days, Scott may walk over a grazing system, evaluating the interceding planting of clover within a grassed field. He also has reviewed the installation of a watering facility – a 20-by-20 foot gravel pad with a 350-gallon tank setting on it – as well as the underground pipeline that delivered water to the tank. Then, he inspected 1.5 miles of wire fence that was installed to break up a large field into smaller paddocks so cattle can graze the grass on a rotational basis.

All the work that Scott assists with is greatly needed, and appreciated, which is a tribute to our Program and our Enrollees.

One of the most interesting questions we ask our ACES Enrollees is what they most enjoy about the ACES Program and what helps keep their interest in the work.

What Scott enjoys about the ACES program is that he can work part time at (NRCS) in which he had always enjoyed, yet also have time to work on other interests/hobbies. He has always been concerned about our environment and he feels that the work of the Natural Resources Conservation Service (NRCS) is under rated as a government priority.

Next question was:  What, if anything, is most challenging about his duties/position?

Scott replied that adapting to program changes that occur in any agency like USDA is challenging (we hear that a lot from both Enrollees and Monitors). Also, new computer programs can be difficult to learn, and Scott admits that he doesn’t take as much time to learn them as he did when working full time.

Scott has two passions outside family matters. He had planned 10 years before retirement to start a beekeeping hobby/business and now has 50 bee hives of his own and tries to help younger and new beekeepers with their own hives. In the fall he gathers seeds from native flowers and offers them to farmers and landowners to improve Monarch Butterfly habitat. During cold months he helps plan and staff a Warming Center for local homeless individuals. Throughout the year, Scott works on social justice efforts supported by the Carbondale Interfaith Council – a group of 18 different communities – including Baha’i, Christian, Jewish and Muslim faiths.

Scott Martin, an ACES-NRCS Enrollee that everyone at NEW Solutions and NRCS appreciates and values greatly!  Thank you, Scott!!